In 2002, American rock band Creed had just released their third studio album, Weathered, and promoted it via a world tour, which, as we all know, was more like a tour of western Europe, the US, Canada, and maybe 5 other random cities, but that’s besides the point. During the tour, numerous conflicts arose surrounding the lead singer, Scott Stapp, after he was involved in a car accident that delayed said tour, and gave way to the vocalist being prescribed strong medication to aid in his recovery.

This culminated in the group’s infamous performance at the Allstate stadium in Illinois, where Stapp, intoxicated from a combination of his medication and alcohol, would mumble his way through several songs, truly showing how ahead of his time he was, before deciding to literally lie down and take a nap mid performance.

Soon after, the band sued for several million dollars by a group of fans seeking refunds, and, though the lawsuit didn’t go anywhere, the damage was done and the band broke up only a year later, all while their label scrubbed the internet clean of any evidence that the concert had ever happened.

This is only the tip of the iceberg when it comes to terrible music, however, as many artists have clocked in their 15 minutes of fame, whether intentionally or unintentionally, and then either moved on with their careers, or faded into obscurity.

After the introduction of the music video by the rock band Queen in the 1970s, many other bands would experiment with the concept for their own music, though little progress would be made. While some, such as Norwegian synth-pop band A-ha’s rotoscoped music video for their 1985 hit “Take on Me,” became instant classics, most productions from the era fall under two categories: the simplistic and the experimental.

Whether it be a recording of the band or artist simply performing the song in concert, or something emulating Queen’s innovations, most music videos lacked any ambition beyond serving as promotional material. Regardless, this period would grace us with some of the most unintended hilarity since Fergie’s rendition of the national anthem at the 2018 NBA All-Stars match.

One of these videos was the 1983 small screen adaptation of pop rock band Journey’s hit song “Separate Ways (Worlds Apart).” While a good song on its own, the same can not be said about the hit’s music video, which suffered from poor planning, on-set drama, and next to no instruments whatsoever. According to an interview conducted by the Huffington Post with guitarist Neal Schon and keyboardist Jonathan Cain, the video’s filming was interrupted constantly by lead singer Steve Perry’s girlfriend at the time, Sherry Shawford, who was jealous of a model that had been cast to play the female lead in the video. As such, Shawford, who wasn’t even invited to be a part of the filming, proved an annoyance to the crew and other band members. 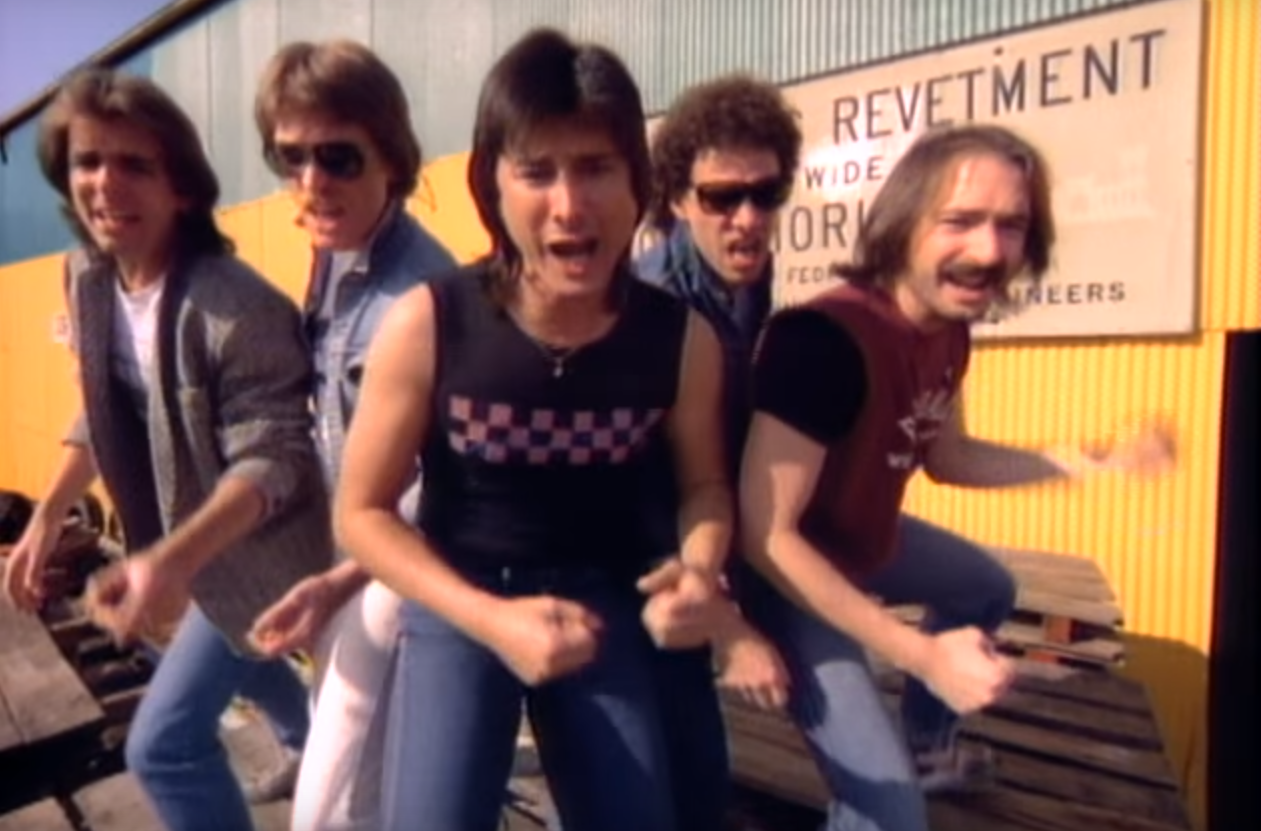 This, combined with the reported budget of only $5,000 dollars, gave us the product we all know and love. Not only is the camera work very rushed, band members, for whatever reason, only use instruments part of the time, as otherwise they are forced to do their own rendition of the air guitar for whatever instrument they normally play, while awkwardly lip-syncing in a way that makes it obvious who the actual singer of the band is. The worst of these offenders is the aforementioned keyboardist Jonathan Cain, who, though he does try his best at first, eventually starts air-keyboarding completely off-rhythm without a care in the world. One may think that the absence of musical instruments was due to a budgetary concern, though as soon as that thought goes through your head, instruments materialize in the artist’s hands. No special effects are even used in this transition: one second the instruments are invisible, and in the next frame they are simply there. Whether this was something the producers considered to be artistic or meaningful will forever remain a mystery.

Regardless of the end product, the video is something that the band and their fans have been able to laugh at since release. The video was even reenacted by the Heller family during the ongoing Covid-19 pandemic.

Though many other music videos have simply aged poorly, among them: Bonnie Tyler’s “Total Eclipse of the Heart,” NSYNC’s “Bye Bye Bye,” and nearly anything by Vanilla Ice, simply none of these have the bizarre backstory that makes Separate ways so entertaining.

Long before companies like Wendy’s had pioneered the art of reaching today’s youth on websites like Twitter, many would try, and fail, to appeal to kids through other ways. Music was a common tool used by companies both in the past and present, and has led to what can only be considered utterly hilarious results.

For starters, Wendy’s themselves are no stranger to these practices as, back in the 80s, they produced a number of musical works to act as a gateway to the younger generations. Though initially intended to be simple training videos, these performances would later be discovered by everyone’s best friend, the internet, and then spread like wildfire. Though a number of training videos were produced, there are only two really worth watching. The first, “Cold drinks,” is as cringe-worthy as it is condescending, after all, probably the one thing everyone would know when first starting out at a fast food restaurant would be how to scoop ice and pour sodas. Not only was this single just plain embarrassing, there was obviously no enthusiasm behind it.

The second, “Hot drinks,” is a completely different specimen all-together. Strangely enough, this song doesn’t really belong on this page, mostly because…it’s actually really good. Sure, the lyrics are super obvious with the instructions they give, but the singer is able to exude a certain level of energy, along with moves and sound effects similar to those of Michael Jackson that gives off a feel-good vibe like an even more obscure hit, the Chicago Bears 1985 single “The Super-bowl shuffle.” Without a shadow of a doubt, I can say that the one hit wonder only known as “The hot drinks guy” earned his minimum wage that day.

Trapped in the Closet

World famous comedic singer and songwriter Weird Al Yankovic once tried to write a parody of this saga, and not even he could top the absurdity that is Trapped in the Closet.

Before his meltdown and ultimate arrest in 2019, R&B singer R. Kelly would draft what would become his magnum opus. Starting in 2005, this half soap opera, half spoken-word album spanned a release period of over seven years, and would later be considered as the holy grail of terrible music by one of the most prolific music critics of our time (me).

Trapped in the Closet follows the tale of Sylvester, a simple man, played by R. Kelly himself, who finds himself in a very intense series of events with his family all in the span of one day, following an affair he had with another woman. The plot can simply not be described beyond this, however, as Trapped in the Closet really is something that needs to be seen to be believed. What I can tell you though, is the background and context as to what this thing, a word I use strongly, as it is debatable as to whether or not this is meant to be appreciated as music, is.

is split into three installments, each consisting of a number of chapters, though for the sake of entertainment, only the first instalment, or 12 chapters, are recommended for your own personal viewing. Nearly every chapter of this saga ends in a cliffhanger, and are sung entirely by R. Kelly, who also wrote, directed, and produced each of the music videos. Though the series starts off fairly normal, R. Kelly is quick to show his mental instabilities through his character, Sylvester, as well as his own fourth wall breaks, simply appearing as himself intruding in another actor’s scene. Among these instabilities are his problem solving skills, or lack thereof, as with nearly every conflict that arises among these characters, R. Kelly always seems to have one solution: singing that he is about to pull out his Beretta, which, according to some sources, is actually a prop M1911 in the video, before threatening to shoot somebody.

While parts 13-22 are readily available, they are not recommended as a serious tonal shift was taken in the transition between albums. This second series follows a more crime-based narrative, with a “everything you thought you knew was a lie,” leap in logic that fails at delivering the insanity of the first 12 chapters. In other words, these parts feel like R. Kelly actually put effort into them. The third instalment is currently not available for free viewing in the US, however it is available for purchase on iTunes and other music stores.

Trapped in the Closet has truly become a cult classic in its genre for a variety of reasons. Some think it is a work of art while others think it is the product of someone who can only be described as an absolute mad-man, though there is no denying its legacy. The aforementioned Weird Al, though he did give up on his dream of topping R. Kelly’s insanity, did indeed cover the song in his own way with his three-part single “Trapped in the Drive-Thru,” which was intended as a foil to the original work, as Al himself said he made the song to display one of the most mundane tasks we’ve all gone through when trying to pick something up at a busy fast food restaurant like Burger King.

Though the artist’s career seems to be on hold for the time being, R Kelly himself has stated that, if acquitted from his 18 counts of federal sex crimes, he will continue to produce Trapped in the Closet, as he has the next 40 chapters of the series envisioned, as well as a planned expanded universe. The TTCEU (Trapped in The Closet Expanded Universe) will comprise the original and future installments of the “hip-hopera” as well as a feature length movie, broadway musical, and prequel novel. Regardless of what ends up happening to this vision, I can almost guarantee that nothing will ever top the absurdity that was the original iteration of Trapped in the Closet.